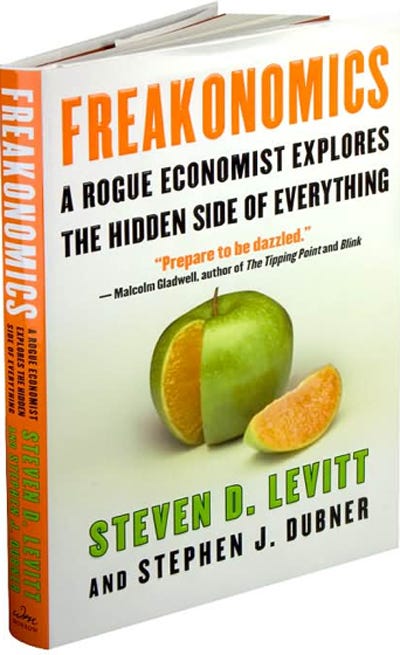 Although it is evasive if an attempt is made to pin down a unifying theme for the book, the underlying intention of Freakonomics: A Rogue Economist Explores the Hidden Side of Everything by Stephen J. Dubner and Steven Levitt remains constant, which is to see the most mundane of things (occasional deviation occurs though) through the lens of economics. The intention serves the purpose of an eye-opening mechanism for our conventional wisdom- the things or causations that we generally assume depending on our common sense. Freakonomics strikes at the core of this conventional wisdom and demonstrates that things do not always function in the way we typically think they do. Equipped with the lucid and engaging writing style, this book offers a truly enjoyable read while enriching the reader’s mind with the subtle art of seeing worldly problems from the non-conventional point of view. Another remarkable feat of this book is associating seemingly unrelated groups of people in ways that are hard to be noticed by an ordinary person. Oftentimes these associations are so eccentric that they would render you speechless when you see the similarity yourself. For instance, you would not expect school teachers and sumo wrestlers to have much in common. But indeed they do have similarities. Again, have you ever thought that a white fundamentalist racist group operates on the same functioning principles as those of today’s real estate agents? This book draws upon such similarities and tracks them back to the root of these cases.

Criminology is an interesting discipline per se. The authors have intertwined economics with criminology in such an amazing manner that this unification rises to a new level. This book also incorporates analysis of the potential of being successful for children based on the background of parents. On its way to introduce the readers to multifarious real-life incidents, this book provides quite a few interesting examples that illuminate the minds of readers.

The book starts with an overview of the upcoming topics (is this an intended mechanism so that more and more book reviewers are allured to write a review of it thus increasing the reach of the book? Never mind). Next to the introduction is Chapter 1. It takes us to the eccentric similarity between schoolteachers and sumo wrestlers when it comes to cheating. The authors explained clearly that incentive-punishment strategy to improve education quality initially prompted some bad teachers to adopt unfair means to make up their shortcomings in performance. Later on, some researchers used a pattern-based detection algorithm to find unusual similarities in the answer scripts of students to identify dishonest teachers. On the other hand, although sumo is associated with honor, such high honor does not prevent the players from entering into contract-based cheating behavior. If you think you know nothing about sumo or a foreign school system, you are most welcome. I did not know them beforehand. The authors describe everything from scratch so your prior knowledge gap will not hinder your understanding of the concept.

The second chapter emphasizes the importance of the possession of information. In such a scenario, one party takes advantage of another party solely based on an informational advantage. This gap is called information asymmetry. It was the functioning principle of the Ku Klux Klan: they used their secret language to communicate and find an ally in some unknown place. It was a group of white racists who were spiteful against the black people. However, once their secret language was tactfully revealed on radio, they started to lose their ground. The interesting fact is, today’s real estate agents do take advantage of the information in a similar way. They are well conversed with the niceties of the market and thus take an upper hand over their clients. But this advantage is gradually eroding off due to the advent of the internet.

Next in the sequence is the 3rd chapter. This struck me as the most interesting chapter in the whole book. This tells us about a sociologist’s experience of living with Chicago’s crack dealers’ gang. Sometimes I was so mesmerized that I almost forgot that it was a non-fiction book. However, here the authors described the social problems with excerpts from research data to reach amusing conclusions. They termed the game of crack dealing as a tournament of pyramid-shaped structure from top to bottom where very few actually make it to the top. The authors thoroughly analyzed how the advent of crack cocaine exacerbated the situation of progressive black society.

The fourth chapter also follows the theme of the third one. The main topic discussed here is a sharp decline in the crime rate in the USA after 1990 and finding its reason. Although the media and general people as per conventional wisdom thought of other factors like strict punishment, increase in the number of the policemen, strict gun control law, etc to bring about that decline, the authors showed from research that, this decline was mostly due to a single verdict about abortion in court some 15 years ago. There is a brief but illuminating discussion about how former Romanian communist president Nicolae Ceausescu laid foundation to his downfall in his own hand by scrapping an abortion law.

The fifth and sixth chapters mostly serve as a guide for future parents. Why future parents? Because the authors have shown that rather than parental behavior, what actually matters in determining the rearing of children are the characteristics of the parents that have been accrued over quite a long period of time. For a better academic performance at school, it is not necessary to attend a good school; rather it is crucial to have the desire to attend a new school or to put differently- the motivation to do better. Most of these cases are validated by comparing the data of blacks and whites in America. The sixth chapter begins with a real case of how names affected two boys, named- Winner and Loser. Later in that chapter, the authors analyzed how the names of babies help to predict the educational background of his parents and in which income bracket their parents belong. But unfortunately, you have to regularly update your data as names tend to quickly condescend from their original threshold.

Freakonomics itself is a great book to fall in love with economics although it does not necessarily incorporate all the aspects of economics (I think that is hardly possible). Nonetheless, I must confess, this book is very engaging and a very fun read. This is a must-read for economics majors and anyone who would like to have a child in the future. In fact, an economics major can do without reading it but it might seriously affect the life of your child if you do not read it.


Istiak Ahmed is a sophomore at the Department of Economics, University of Dhaka. He wanted to build his career where some forecasting would be involved and now he considers himself extremely lucky as economics discipline turned out to be exactly what he wanted to do. He aspires to become an economist someday.